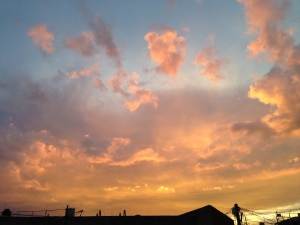 A beautiful sunset sky over the rooftops of Guadalajara, Mexico.

We humans like to talk about the weather, especially when there’s nothing else to discuss, and for good reason, after all. Weather is one of the top factors influencing our lives on any given day, dictating at least in part what we wear, how we feel, what types of activities we’re willing to engage in, when and where we travel to, and even where we live. Here in Guadalajara it’s been raining yet again, starting and stopping and then starting again, the sky a persistent dull gray yesterday and the day before. However, today has seen a bit of improvement and as we move deeper into November and the fall, we in Guadalajara have a lot to look forward to weather-wise, believe it or not. While many places in the northern hemisphere are slipping into periods of worse weather in terms of storms and much lower temperatures, the weather here is actually improving overall and will only continue to do so for several months.

October is the last month of Guadalajara’s (and many other Mexican locales’) rainy season each year. The graphic from WeatherSpark.com (a fantastic site) below illustrates clearly what we mean when we say “rainy season”, not to mention what kind of rain we’re talking about. 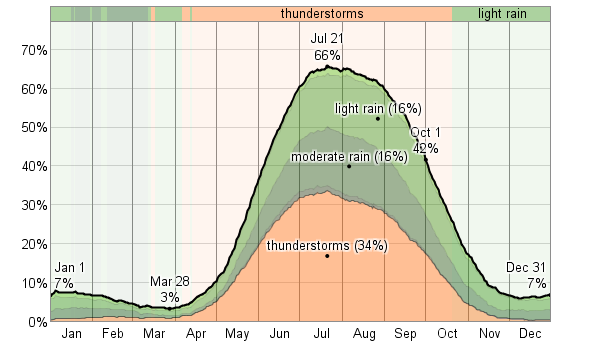 Probability of precipitation at some point in the day from WeatherSpark’s averages report on Guadalajara.

November is the month of transition out of that rainy season and into a much more pleasant season of sun and slightly cooler temperatures. Where temperatures are high during the first part of the rainy season of June-October (yes, we get a full five months of it), causing one to sweat underneath that raincoat they have donned to keep the torrential rain out which ends up drenching them through anyway; where the occasional hail is somehow miraculously not uncommon, giant ice cubes of hail that come catapulting down on occasion despite the high temperatures; where startling streaks of lightning and great claps of thunder cut open the sky; where streets flood on a semi-regular basis; November and the upcoming months instead bring further moderating temperatures (until mid to late February), the rain subsides considerably, sometimes not making an appearance for weeks at a time, and there is a lot of sunshine with very few clouds as the next graphic indicates. 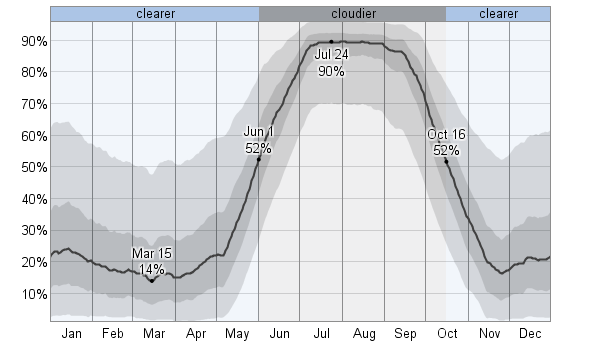 Yes, while the June-October period may see storms that shut down streets, damage buildings, topple entire trees and electricity poles thus disrupting traffic and power in parts of the city, and completely change one’s plans (or at the very least require you to invest in and wear some heavy-duty galoshes), November-May are months that, simply put, make you forget all that. Indeed, December through February in particular might be the most amazing quarter of the year for the city, with respect to the weather. Sure, in the early morning or late evening hours, you may need to throw an extra layer on, but that is a small price to pay for weeks without rain or even a cloud in the sky and temperatures that, on average, don’t dip below 41°F at the coldest point in early January and spend time between 75°F and 83°F at the hottest. 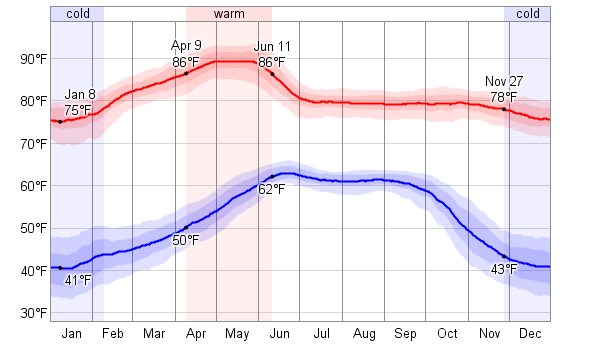 Daily highs and lows from WeatherSpark’s averages report on Guadalajara.

From the above graphic, we can see that beginning in mid-February on through May (the hottest month), temperatures climb up again to an average of 89°F. Not terrible in absolute terms and not a terrible climb from the 78°F average in November, nor is it extremely humid at that point either, but it does begin to feel noticeably hotter again. May is especially rough as by this point there hasn’t been much rain at all to cool anything down and the city feels grimy from dirt and pollution in the air. March and part of April are still quite pleasant.

Check out that blue line in the previous graphic, though. Observe how much more the average lows change from the end of January all the way through to the middle of June relative to the highs, climbing over 20°F! Those are the nighttime hours, folks, and sleeping gets a bit uncomfortable to say the least, heading into and through the rainy season. You’ll eventually be trading your blanket in for a fan.

Daily hours of daylight and twilight from WeatherSpark’s averages report on Guadalajara.

The amount of daylight in a day changes a bit as well, with day length dropping to just under 11 hours on average at its shortest in December and cresting at over 13 hours at its longest in June. As fall rolls on, the fewer hours of daylight have already become quite obvious to us down here and we still have more than a month to go before the days stop shortening. Again, small price to pay for cooler temps and clear skies.

Temperature-wise, then, Guadalajara is pretty moderate overall, especially when it comes to the daily highs. It rarely ever gets really hot or really cold, unlike Palm Desert’s summers in California or Minneapolis’s winters in Minnesota. Regarding average dew points, the city varies from dry to mildly humid only, over the course of the year. The extremes of the city’s weather are in the humidity, cloud cover, and average probability of precipitation during the rainy season of June-October. See WeatherSpark’s averages report on Guadalajara for those and more interesting graphics and further analysis, including average sunrise and sunset times. You can also view forecasts and a wealth of other weather-related information for Guadalajara and many other cities throughout the world while you’re on the site.

It’s clear why Guadalajara, along with many other parts of Mexico, is such a popular destination for visitors and retirees during the next few months. We hope you have a chance to experience and enjoy it as much as we have!