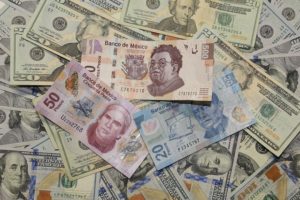 The strength of the US dollar ($USD) against the Mexican Peso ($MXN) has been the focus of a great deal of attention over the last year. Plenty of theories have been set forth to explain it, ranging from the cratering of crude oil and other commodity prices to the rhetoric of US Republican President Donald Trump. Conversations about the exchange rate among certain groups on social media exploded last year, while a cursory glance at Google web search trends for “Mexican peso” indicates that over the last 5 years, interest really began growing from 2015 into 2016 with large spikes in April and November of last year. Needless to say, there’s good reason for all the attention the topic has been getting. The exchange rate between the $MXN and the $USD (or other currencies such as the Euro (€EUR)) affects multiple interested parties, from Mexicans both inside and outside of the country to travelers to expats residing in Mexico to multinational corporations and governments looking to do business with Mexico. Why had the $USD/$MXN exchange rate risen so high, and will the dollar continue to stay strong against the peso? Or, will the peso continue to recover as it has been doing recently? In order to answer these questions, we must look at the behavior of both the peso and the dollar separately as well as in relation to each other. It’s important to gain the best possible understanding of the situation, and we’re here to help.

Google web search interest in the Mexican peso over the last 5 years.

To start with, we need to get into the correct frame of mind.

Establishing a little structure around the conversation should prove useful. For one, currencies can be thought of as goods to be bought and sold. The US dollar is one, the Mexican peso is another. Additionally, when we talk about the value of a currency, we mean the value with respect to other currencies. What can the peso buy that is denominated in dollars or how many pesos does it take to buy one dollar? In other words, when we talk about the strength or weakness of a currency, we can’t talk about it in a vacuum. We have to discuss it in terms of how it stacks up against its peers.

Now, on to some specifics.

Right now, US dollars are in high demand worldwide and have been for some time. 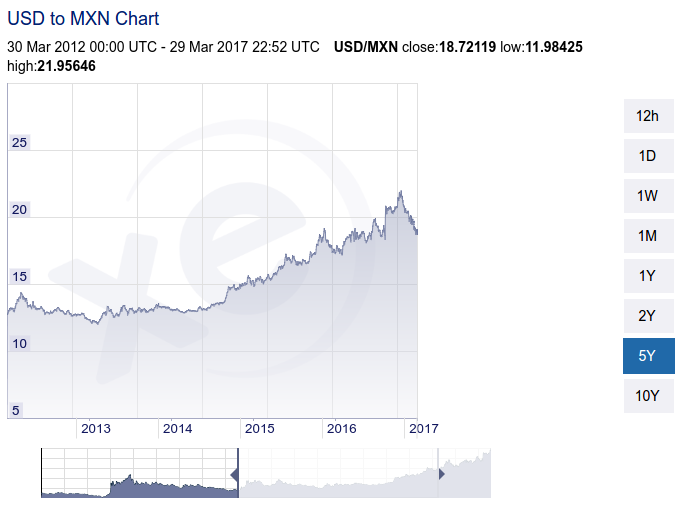 The $USD to $MXN over a five year period. This chart effectively shows how many pesos one dollar purchased over that amount of time.

Pesos, on the other hand, were not in such (clearly) high demand, but that is changing. 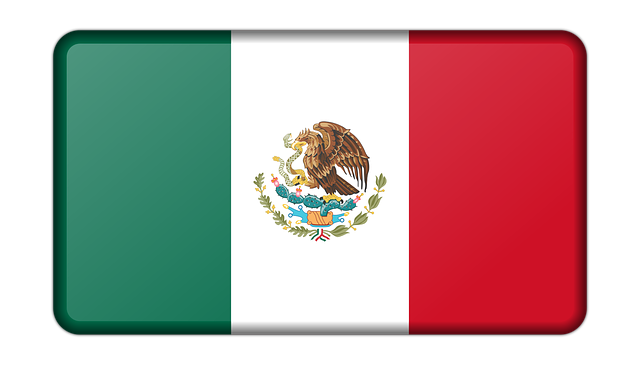 Here are some final thoughts.

While we cannot predict the future, $1 USD bought almost $24 MXN not so long ago. That rose from approximately $12 MXN in April of 2013. It is now sinking quite sharply again and, as of the publication of this article, sits slightly below $19 MXN. The peso has been recovering considerably against the dollar on a nearly daily basis for a little while now, since mid to late January of this year. If we can claim that this is a trend, that new trend is down, in favor of the peso.

What we can currently observe is that the price of crude oil has recovered somewhat, though the price of crude really doesn’t explain away the weakness or strength in the value of the peso as some have claimed. For example, crude has been gaining in price over the last year, while the peso really didn’t begin to firm against the dollar until the start of 2017. Additionally, the Trump administration appears to be softening its stance on doing business with Mexico. Meanwhile, the Bank of Mexico has engaged in a fresh round of currency intervention in order to prop up the peso. This is done by using their store of dollars to purchase pesos. What’s more, there continue to be companies that invest in Mexico, in spite of the Trump administration’s posturing on economic relations with Mexico. Not to mention that political stability in the US is currently tenuous at best, what with congressional and intelligence investigations into the influence of Russia on the elections last year and the country’s communications with the Trump campaign. Should anything come of those investigations, the dollar would be adversely affected. All of this bodes well for the further strengthening and stabilization of the peso against the $USD.

Practically speaking, that means that for folks who convert their local currencies into pesos in order to live in or visit Mexico, you’ll be paying a bit more today than you had been over the last few months in rent, food costs, tours and so on, because while your rent may still be the same amount peso-wise, it currently takes more of your home currency to buy the pesos that you pay your landlady with. However, imports from other countries outside Mexico and priced in pesos might now be a bit cheaper. For those of you outside Mexico, the country’s exports reaching you might now be a bit more expensive. It’s all a give-and-take kind of thing.

No doubt there will be further movement in the exchange rate as the US dollar is still no slouch and many details of our brave new world remain up in the air. We do anticipate an exchange rate that favors the peso, relative to how it has been, but only time will tell what is yet to come. The future, as always, remains unpredictable.