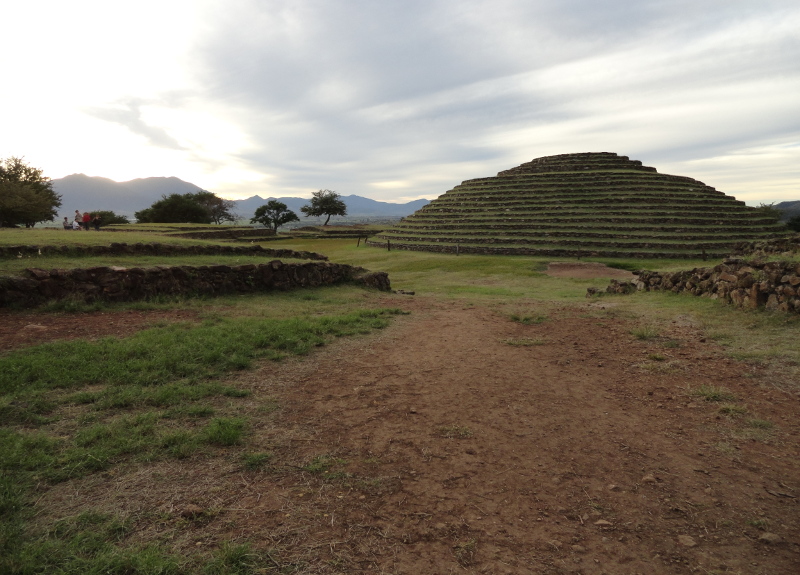 A circular pyramid at the Guachimontones ruins site.

The reality that Mexico is home to some of the world’s most enchanting – and in some cases, most famous – ruins is no secret. From the Palenque ruins in northern Chiapas to those on the Yucatán Peninsula including Chichén Itzá and Calakmul as well as those along the Ruta Puuc or smack on the Tulum coast, the country is bursting with various phenomenal examples. What many do not realize, however, is that just outside of Guadalajara sit some of the most unique the world over has yet to offer. Word has it that, with the exception of the Cuicuilco Pyramid in Mexico City, the ruins that we’re referring to here in Jalisco are the only circular pyramids to be found anywhere. Moreover, the site of these ruins, known today as Guachimontones, is just a hop, skip and a jump from the city, making for a great side trip on the way to the coast to spend some time on the playa or a wonderful way to spend at least a half-day satisfying that archaeological craving and nicely rounding out your time in Guadalajara.

The Guachimontones archaeological site sits just outside of the town of Teuchitlán below it. It’s a rather picturesque and tranquil locale affording beautiful views of the town and the lake of La Vega, on which it is situated, as well as rolling hills and mountains beyond. Aside from the vistas, you’ll be treated to the remnants of the aforementioned circular stepped pyramids, (at least) one ball court, some foundation walls and earthy mounds that still hide structures yet to be uncovered. Generally speaking, the multi-tiered area is flat and grassy or level compact dirt, with clumps of trees and other vegetation here and there and thicker brush and copses of trees or outright forest in the surrounding undulating hills. 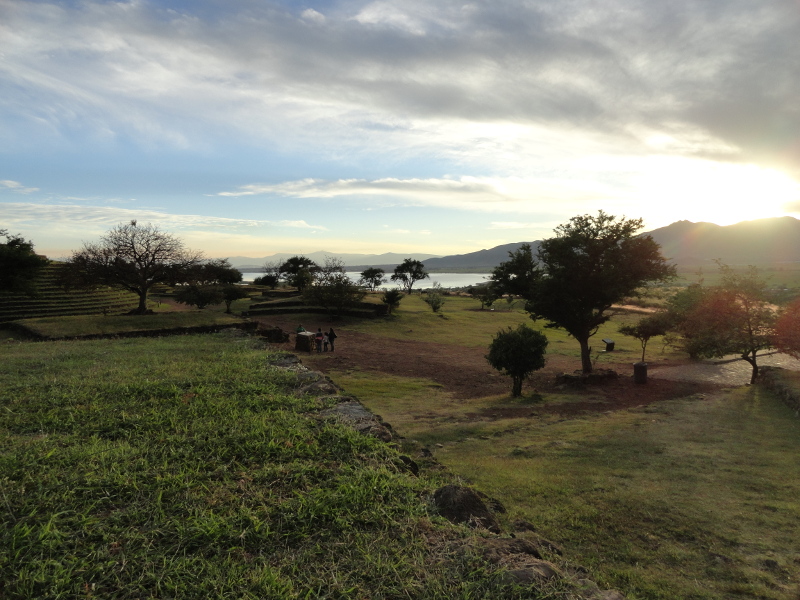 Part of the Guachimontones ruins site with the lake La Vega visible in the distance.

Walking the area is not terribly strenuous, although you’ll need to be prepared to hoof it uphill along a cobblestone and concrete roadway and its paved sidewalks from the entrance parking lot. We suggest comfortable shoes fit for distance walking and something against the harsh rays of the sun as there isn’t much to take cover under once you’re out there.

The roadway leading up to the ruins of Guachimontones.

A stop at the modern interpretive center, constructed in 2012, is highly recommended either before or after you see the ruins themselves. There you can learn much more detail about the area’s former Mesoamerican inhabitants and catch artists’ renditions of life there, as well as samples of obsidian and other elements with which these ancient peoples worked. It is there that you can also arrange a guided walking tour (for a fee) if you are so inclined, as opposed to walking the site on your own. 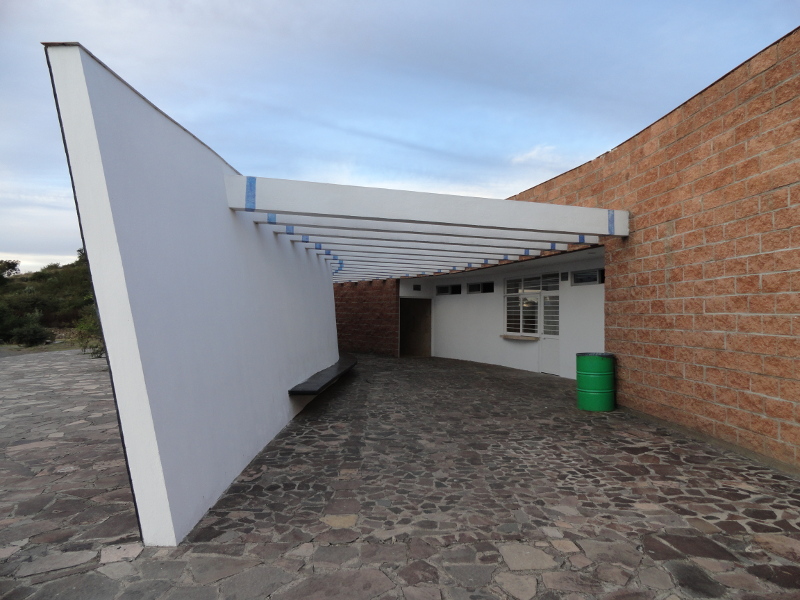 Part of the Guachimontones Interpretive Center from outside. A stop inside is highly recommended.

Getting to Guachimontones is a breeze by car. You’ll head in a northwesterly direction out of Guadalajara along the highway that begins a trip to Puerto Vallarta. Upon arriving at Guachimontones, there is a large parking lot immediately available near the entrance to the modern visitor center. Allow for approximately 1 1/2 hours driving each way, from and returning to Guadalajara.

You can also visit by bus. From the Central Vieja (or “old” bus station) next to Parque Agua Azul, take a bus belonging to the Autotransportes Etzatlán line heading to Teuchitlán. The charge will be $84 MXN per regular adult, as of the publication of this article. While the address for Central Vieja is Calle Los Ángeles #218, you can enter either from the Calle Los Ángeles side or the Avenida Dr. Roberto Michel side. You don’t have to go to the Central Vieja to catch this bus, however. You can also hop on at the following locations (if you trust yourself to spot the bus in the street) and pay once onboard:

Once in Teuchitlán, exit the bus and either walk the remaining 1.5-2km to the Guachimontones archaeological site entrance or take a taxi. If you opt for the latter option, remember the distance to the ruins is quite short by car, so don’t fall for any exorbitant fares.

Visiting the ruins is free and can be accomplished from 9am-5pm any Tuesday through Sunday (closed Mondays). 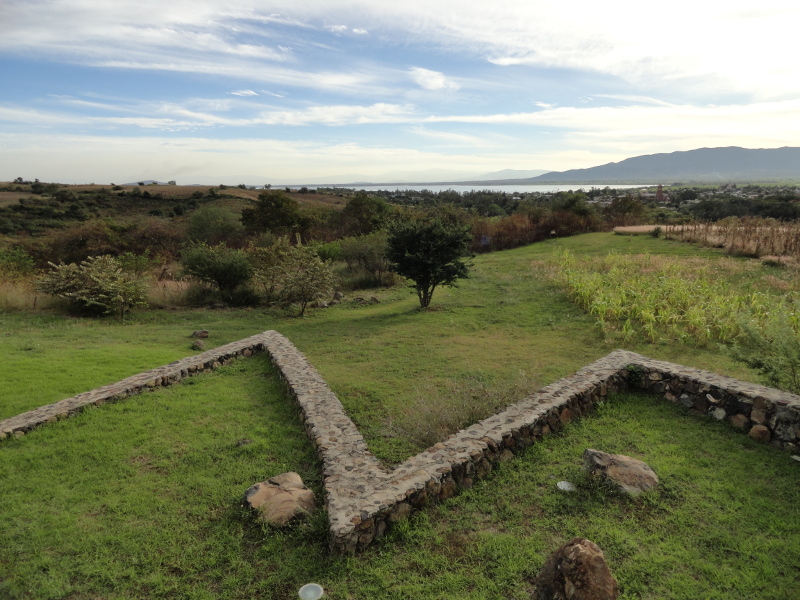 At more than 2,000 years old, the ruins of Guachimontones make for an extremely worthwhile excursion. They form part of a region, including nearby Tequila, that UNESCO has designated a World Heritage Site. Sadly, the ruins were also placed on 2008’s World Monument Watch on account of the extensive looting that had been occurring, such as stones being removed from the site for reuse in the construction of modern streets and buildings in Teuchitlán. 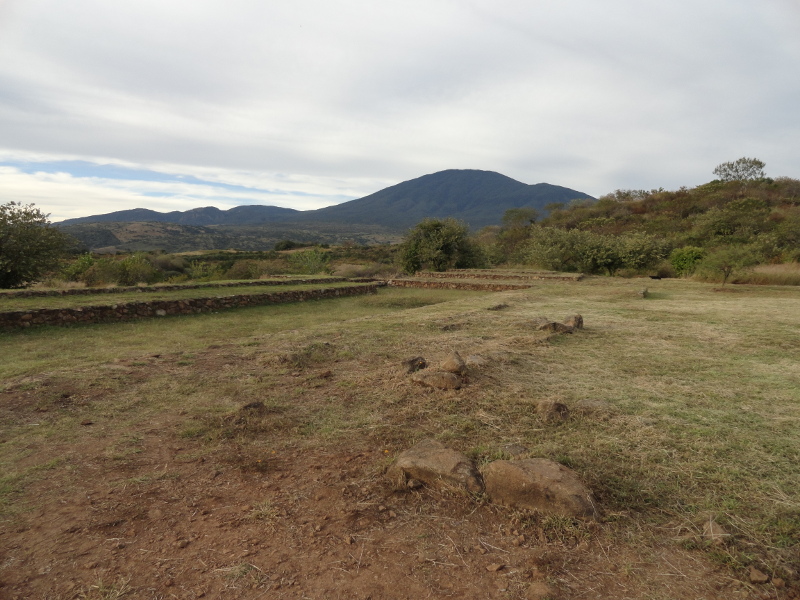 A section of the Guachimontones ruins site.

While the existence of the ruins was already long known to locals, who reportedly considered the site to be sacred, the record indicates that the first outsiders to be made aware of it were Dana Lamb and his wife, Virginia “Ginger” Marshall Lamb (maiden name Bishop). That apparently fearless duo is a story unto itself. Suffice to say that their learning of Guachimontones from the locals and subsequent visit to the site was set forth in Enchanted Vagabonds, a book published by Harper & Brothers in 1938 under Dana Lamb as the sole author. The book consisted of much more than their description of the place in question, it being a general account of their travel adventures by sailing canoe from California down into Latin America.

It would not be until 1970 that a professional archaeologist – and one of significant professional stature at that – would get involved. Even then, American Phil Wiegand and team, including wife Arcelia García, did not begin excavating in earnest until 1996 when they had finally procured sufficient funding in order to do so. In other words, what you are able to see at Guachimontones today was just beginning to be exposed only slightly more than 20 years ago. By contrast, major long-term archaeological efforts would begin on Chichén Itzá in the early 1920s, or safely over 90 years ago. 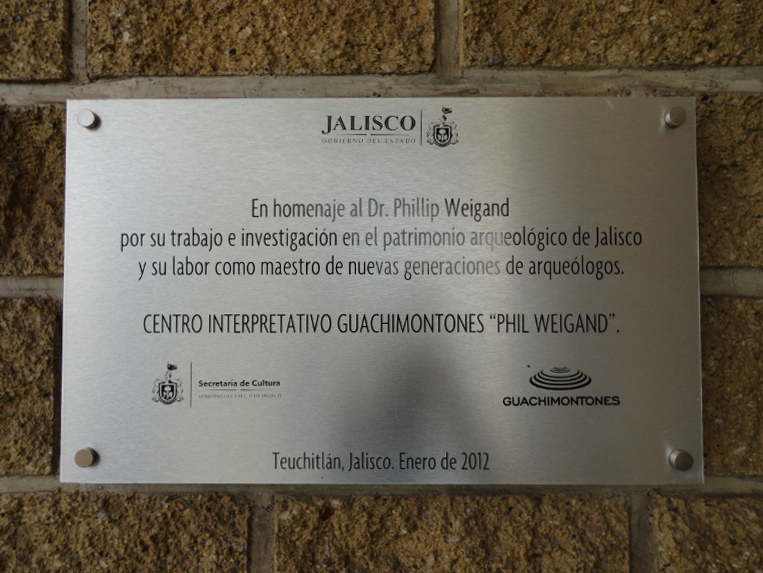 As was the case with Chichén Itzá, (at least) one ball court, though not as grand, was discovered at Guachimontones. It has been posited that matches there were played for reasons ranging from the settling of disputes to determining those to be granted “immortality” through religious sacrifice.

While we’re on the topic of religion, there is evidence that the complex, multi-caste society of the Teuchitlán Tradition, which is thought to have numbered more than 40,000 covering an area of some 24,000 hectares during its apogee, worshipped the wind god Ehecatl-Quetzalcoatl. The deity was otherwise more generically referred to as the Feathered Serpent and physically appeared as such in some form or fashion, although it was often depicted in human form as well. 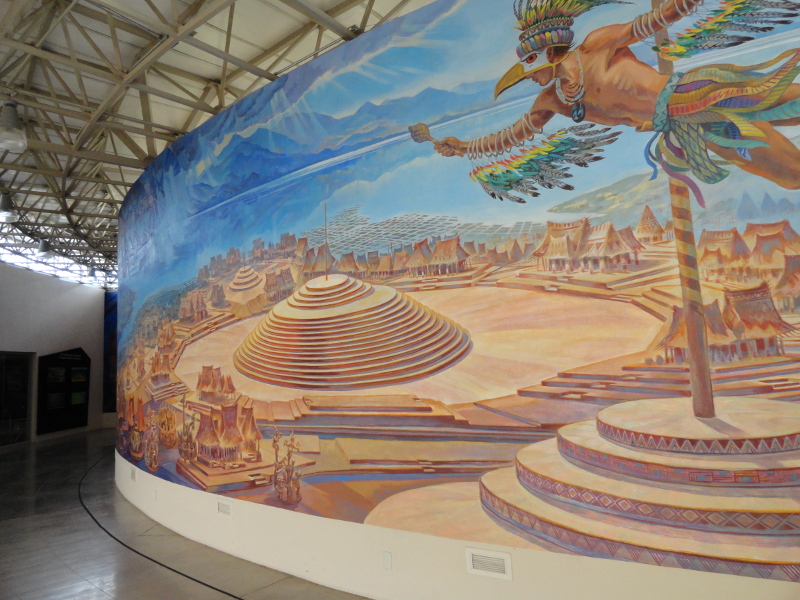 Artist rendition of the former city and the wind god Ehecatl (or a society member playing the deity), found inside the Guachimontones Interpretive Center.

Stepped circular pyramids such as those found at Guachimontones likewise served ceremonial purposes, so it has been theorized. They may have been the scenes of Volador-type rituals whereby certain participants were swung hanging from the tops of enormously tall poles protruding from the upper-most levels of the structures, with individuals balancing erect at the poles’ high ends. Other structural characteristics of the pyramids include the presence of 52 steps to coincide with time elements related to the number 52, such as the number of weeks in a year or the number of cycles in some Mesoamerican calendars (including that of the Mayans). 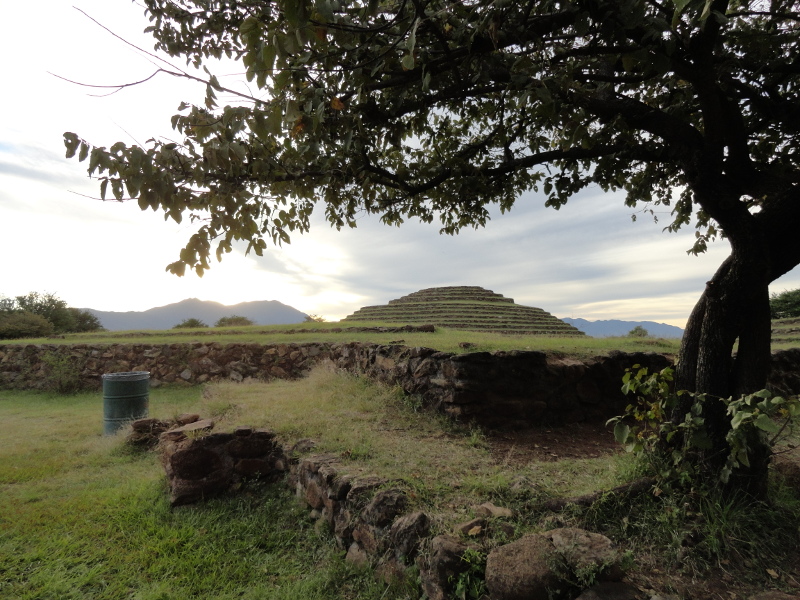 A circular pyramid at the Guachimontones ruins site.

It is believed that the civilization of the Teuchitlán Tradition came to a rather sudden end somewhere around 900 CE. To this day, the reasons behind its disappearance – and how the area it inhabited even came to be known as Guachimontones in the first place – remain mysteries for you, the modern-day visitor, to ponder.