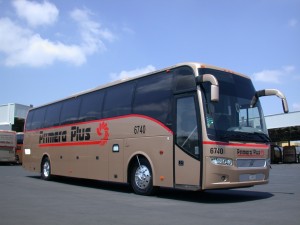 Perhaps you’ve been bouncing around Mexico and you’ve just arrived at the newer central bus terminal (la Central Nueva) in Guadalajara by, well, bus (camión). To get to the heart of Guadalajara, the easiest means of doing so is by taxi, of course, and there’s no shortage of yellow vehicles with eager drivers waiting to give you a lift somewhere. However, you may want to save yourself some pesos and take an express bus to the older central bus terminal (la Central Vieja) in the heart of the city instead – it includes a short walk but the whole process is easy enough that it’s worth the savings. Allow us to explain how to get it done. We’ll also mention your taxi options while we’re at it since there are two ways of going about that.

To get to la Central Vieja from la Central Nueva, grab your bags and proceed to the sidewalk outside la Central Nueva. You’ll pass by a lot of folks offering you taxi service. You’ll want to turn left and continue to the northwestern corner of the terminal building along the sidewalk and then proceed north following the main entrance road, Carlos Salgado, out of the terminal area and toward De Las Torres road. As you walk you’ll pass even more parked taxis as well as hole-in-the-wall restaurants and convenience stores to your right (the chicken plate at the first chicken-rotisserie-type place isn’t bad for $35 MXN as of this post’s date).

When you get to De Las Torres, cross to the other side. Then, point yourself to the left, cross the road again (when it’s safe, of course!) and continue down for a full block. When you get to the next corner with Avenida Patria, you’ll see a pedestrian bridge above you and to the right. You’ll want to get to the other side of Avenida Patria to the corner opposite from you but still on this same side of De Las Torres. That corner is your bus stop. You don’t have to use the suspended foot bridge to cross, we haven’t, just be aware of traffic and don’t get hit. Here’s a map of the walking route.

You’re waiting for a larger bus of the Oriente line (Oriente will be written on the sides of the bus). Flag it down when you see it coming (your wait should be less than 20 minutes at any given time) and verify with the driver that the bus is in fact headed to la Central Vieja – it should also be written on the front windshield. If so, hop on and pay the driver $7 MXN per person, grab a window seat, and enjoy the ride to your final destination. Once there, you can catch another bus or a taxi outside the terminal area. Be aware that la Central Vieja is a little bit dicier than la Central Nueva. Keep an eye out and your stuff close.

You may also find that the bus does not enter la Central Vieja for its final stop but instead stops outside of la Central Vieja on the side of Avenida 5 de Febrero. If so, just walk further to the northwest along this avenue until you notice people standing outside of some food stands and restaurants on the sidewalk waiting. That’s the spot where you can flag down additional city buses to get you to your ultimate destination. If you want to catch a taxi instead, continue on the sidewalk until you notice some parked taxis. There is another taxi area on the other side of la Central Vieja. Here’s a map of the area. 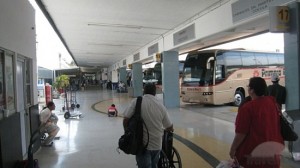 To get to la Central Nueva from la Central Vieja, the steps are reversed. Note that the Oriente buses bound for la Central Nueva will have this destination written on the front windshield and they leave every 20 minutes or so. Price is the same.

In this direction, la Central Nueva is not the final stop, so you may want to let the driver know that’s where you’re headed and they’ll probably be nice enough to give you a heads-up when your stop is up. Otherwise, you can keep an eye out for green roadsigns for the terminal and, once you feel like you are taking an off-ramp off a road that feels a bit like a highway, look for a PEMEX. The bus stops next to it and that’s your endpoint. Otherwise, track yourself on your smartphone or tablet if you have cell service to know when it’s time for your stop, which is on the side of Carlos Salgado road.

From there, it’s a short walk straight down the road in the direction the bus was going when you got off. Follow it through the intersection with De Las Torres road and past parked taxis and food stands and restaurants to la Central Nueva. Here’s a map of your stop and walking route to la Central Nueva.

If you’re going to catch a taxi, you may as well take it all the way to your final destination from la Central Nueva, as opposed to taking one to la Central Vieja, unless you’re meeting people there or are planning to take a local city bus from there. You can either walk outside the terminal area of la Central Nueva and further down the main entrance road to catch one (cheaper, unofficial) in Carlos Salgado road, or you can purchase a flat rate taxi ticket from a kiosk inside the terminal area (more expensive, official) and then catch your taxi just outside the terminal on the curb – just hand your ticket to one of the drivers or managers. In either case, your rate is destination-dependent, of course.