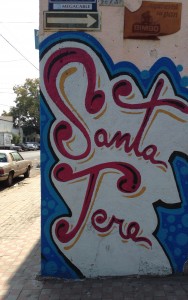 Colonia Santa Teresita (Santa Tere for short) is a dense, vibrant, and busy section of Guadalajara, Jalisco. It boasts two tianguis in addition to its extremely popular core market in the heart of the colonia. One tianguis takes place every Wednesday while the other runs on Sundays.

What is a tianguis you ask? It’s a street market, and in Guadalajara specifically it is a collection of puestos (stands) assembled together literally right in the middle of the street, often with a mixture of metal rods and tarps. When there is a tianguis in effect, there’s no driving through that area anymore. Doesn’t matter if you are an operator of a city bus, you ain’t getting through, those streets are closed.

Tianguis across the city vary in size, schedule, location, and what they sell, among other things. Often, there’s some common theme to them, if you will, and they may contain makeshift “restaurants”. This one’s more about foodstuffs, that one’s more about clothing. And that’s the way it is for the two that take place in Santa Tere. 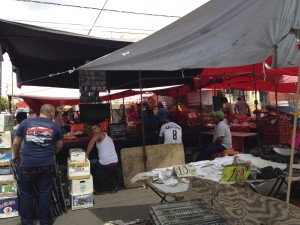 If you’re interested in purchasing produce, seafood, poultry, and cheese, visit the Wednesday tianguis that stretches from Calle General Eulogio Parra to Calle Jose Maria Vigil in Calle Manuel M. Dieguez. You can also find things like DVDs and household items from a smattering of other random puestos, but in general, produce dominates the landscape here. Prices to be had are typically lower than what you’d normally pay at the established market in the heart of the colonia or elsewhere in any brick-and-mortar location in the city, for that matter. Visit anytime between roughly 8am and 2-3pm, although the earlier you arrive, the better the selection. After 3pm, some vendors remain while others begin striking their puestos.

If you’re on the hunt for new threads instead, the tianguis on Sundays is clothes and accessories galore, offering up everything from shirts to hats to belts to pants to dresses to swimwear to sunglasses to you name it. Again, the prices are cheaper than those in the stores but then often so is the quality. Other random items are sold here as well, including electronics, but all-in-all, it is mostly about the clothing. With the street work and reconstruction underway throughout the city (still), this tianguis is for once getting pushed around instead of the other way around (when it normally halts and sends traffic scurrying around it along other alternative paths). Hence, the best advice we can give is to head to the mercado and look for the telltale makeshift metal and tarp structures of the tianguis. It is one of the bigger tianguis in the city (quite a bit larger than the Wednesday one for sure) and you will find it, trust us. Hours are about the same, morning to sometime around 3-4pm.