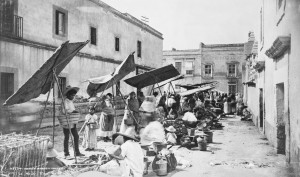 The heart of one of the largest tianguis in Guadalajara can be found at the intersection of Avenida Patria and Avenida Tabachines. Tianguis Loma Bonita stretches from this intersection many blocks in either direction in Avenida Tabachines, and along Avenida Patria to the east. This tianguis is not as large as el Baratillo, but it’s not as generally dangerous either, and of interest is that it has more people bringing their own things from home to sell from tarps on the ground. In other words, this tianguis is part yard sale, if you will, in addition to the established metal and tarp puestos.

Start at the intersection mentioned above if you want to peruse freshly-made wooden furniture, waiting to be sold and stained right there in the street. You’ll also find used and new tools, household goods including handmade ceramic coffee mugs, produce, and a host of other items. This tianguis really has a bit of everything, especially when you throw in the random things people haul out of their homes to try and sell.

Bartering skills and knowledge of the Spanish language come in very handy. Visit the tianguis on Sundays during the day, roughly from 8-9am until 2-4pm. Traffic continues to push through along Avenida Patria, including the buses, but it’s slow-going and the area around the tianguis is incredibly congested. If you’re going to head there in an automobile, better to park the car a few blocks away and walk the remainder to the tianguis.