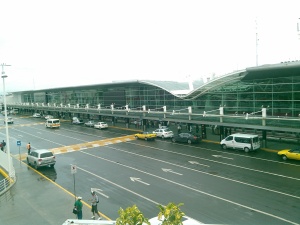 The Guadalajara International Airport (Aeropuerto Internacional de Guadalajara), otherwise known as Don Miguel Hidalgo y Costilla International Airport (Aeropuerto Internacional Miguel Hidalgo y Costilla), is a fairly easy one to navigate as far as airports go, so long as you know a few basic things about it upfront. We’ll cover those basics here so that you are guaranteed to find your way around it like a boss.

The entire complex has its usual components – terminals, parking, freight, and so on. As we’ve already written about, there is also a nearby bus terminal where buses from the city drop you off and similarly collect you for journeys into the city. See our airport transportation guide for further details on this and other transportation options including taxis and shuttles.

As for flight terminals, there are two. Terminal 1 is the main terminal that all airlines operate out of, the only exceptions being VivaAerobus and Aeroméxico Connect. These latter airlines have their own separate terminal, Terminal 2. 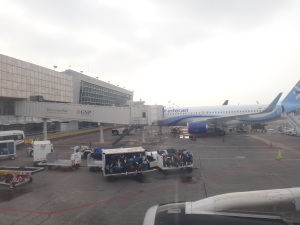 What that means is Terminal 1 is a mix of domestic and international departures and arrivals for all airlines besides VivaAerobus and Aeroméxico Connect that land at or takeoff from Guadalajara. One end of the terminal, part 1A, is reserved for domestic, the other, part 1C, for international. If you’re arriving via an United Airlines flight from the US, you’ll exit Immigration and Customs at the international end of Terminal 1. See a graphic of the main terminal here. Terminal 2 is solely for any flight operated directly by VivaAerobus or Aeroméxico Connect and it has its own security and so on. See a graphic of Terminal 2 here.

At the moment, the airport as a whole is not so large that it has its own tram or rail of any kind. However, for some flights, you will need to be bused from the terminals to your plane waiting on the tarmac or vice versa after landing at GDL. The two terminals themselves are not terribly far apart, though. You can walk from one to the other using sidewalks or you can drive to or between either one, but you won’t need to hail a taxi from Terminal 1 to Terminal 2, for instance. Structurally speaking, Terminal 1 is two stories tall, Terminal 2 is just one tall, and each terminal has its own corresponding 24-hour parking structure near it with payment kiosks that allow for the use of credit cards. See here for more information on parking, including off-site alternatives.

For travel within Mexico, Volaris appears to offer the most domestic destinations of all the airlines that fly through Guadalajara. See a complete table of domestic flights by airline here. If you show up to the airport hungry or too tired to go on, see this list of eateries complete with locations in the airport and hours of operation (note that all are located in Terminal 1). Unfortunately, the one hotel that used to exist at the airport, Hotel Casa Grande, has been shut down. You will need to drive toward Guadalajara along Hwy 23 to get to the closest hotel. For instance, the One Guadalajara Tapatío hotel, about 12-13km in, has been recommended.

Be sure to sound off in the Comments section with any questions or tips of your own regarding the airport, and safe travels!