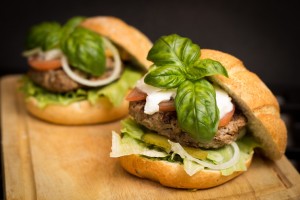 Yeah, we know, them’s fightin’ words. Nothing prompts controversy like an argument between passionate people over which joint serves the best hamburger around. You’ll have to take our word for it, though, we’ve been on the hunt for some time now and have sampled the offerings of street carts, food trucks, and sit-down establishments in an attempt to find a winner…and we think we’ve identified one.

On a hot tip from a friend, we finally found what we were looking for. We had tried many-a-place in our search, and many came close but ultimately always fell short somehow. After our first taste of this Real-Deal Restaurant, we tried a few more places, just to make sure we weren’t imagining things, and then we went back to confirm our suspicions. And upon returning we basked in the pleasure of an amazing hamburger.

What is it about the hamburger that eludes so many chefs and home cooks? It shouldn’t be that hard, many would say – meat, bread, toppings, done. But difficult it is, as the abundance of folks’ secret methods around the globe attests to. And what is it about the best hamburger that grabs us? Is it the bread, the fresh toppings, the crazy sauces, the gnarly things we’ve come to do with them (deep frying them, piling them high with meats from other animals, stuffing the patties)?

Well, in our personal opinion, if you don’t have the beef nailed down, then you don’t have the best hamburger. For the sake of transparency, that’s the basis for our judgement. Hence, in our opinion, places can have beautiful bread, tremendous toppings, amazing aoilis, perfect pickles, bomb bacon, and charming cheese, but if the meat’s texture or flavor is off, it’s a fail.

Don’t get us wrong, we’ve had plenty of burgers that have been alright. They just haven’t been exceptional. Among the complaints we generally have accross the board are over-seasoned beef, mushy meat texture, artless bread, store-bought frozen patties and buns that are just assembled to serve as vehicles for a range of sauces and canned or sloppy toppings, and experimentation with meat blends that is more Dr. Frankenstein-esque than anything else.

Then there’s the issue of cooking the meat, lest we forget – often times in mexico you will ask for one grade of doneness and you will get a different one (or the meat will simply be burned). Other gourmet places go for the WOW factor, with crazy fancy concoctions that may boggle the mind, but in all their creativity they forget to look after the burger’s heart and soul, the beef. 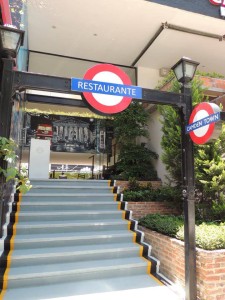 If you’ve been gathering that we’re hard to please, then you’re very observant. Who could possibly stand up to such levels of scrutiny? Well, it just so happens that there is a place, and it deserves a huge shoutout. That place is Camden Town, located in Providencia, and when it comes to burgers, they are the real deal.

The joint is a rather large split-level sit-down establishment with a full bar on its lowest level, complete with tables to sit or stand at and a line of televisions to enjoy games or events; a hosting station mid-level; and another seating area on the highest level with more of a restaurant feel to it (but with yet one more television that graces the wall next to the kitchen entrance). Overall, the place is blessed with lots of plant life, structural openings to allow natural light in, and a rather open and airy ambiance that allows you to see quite well around you and to other levels. Photos of England and diagrams of the tube system dot the walls here and there. Conversation can be easily had, no blasting music or TV programming to compete with.

And the food? Well, we’re ecstatic over it. From the perfectly formed and grilled hamburgers to the artisanal bread made in-house to the high-quality toppings to the sauces and condiments, we are in heaven each visit. The beef comes from a butcher down the street and is so well cared-for and prepared that we’re under the impression that the chef is using some form of black magic back in the kitchen or has perhaps made a deal with the devil.

For a basic hamburger, you are going to pay very reasonable prices, especially given the neighborhood and the quality of the finished product. If you’re willing to pay more, you can upsize to a delicious double or upscale to one of their fancier offerings like the Admiral Codrington. Don’t like beef? Order the chicken sandwich or the lamb burger. Don’t like hamburgers? Order their other plates, like their exquisite tuna carpaccio or octopus. We’re not kidding. Whoever cooks for Camden Town is absolutely no joke, a master of their trade. As for the rest of the employees, the wait staff is extremely attentive and courteous and the manager is nothing if not friendly, accommodating, and eager to please.

Yes, we’re gushing here, but as always we remain objective in bringing you our recommendations. That objectivity demands that we mention one criticism we do have, that their beer board is apt to be inaccurate, listing brands that they’re not even carrying at the moment. However, for the incredible food and nice environment, we find this to be an entirely forgivable offence.

To put it bluntly, Camden Town is a must, whether or not you have a hankering for a stellar hamburger. This is one of the best restaurants this large city has to offer, hands-down. Time to eat.